WAITING FOR THE TRAIN: Photography shoot using the Lencarta Safari 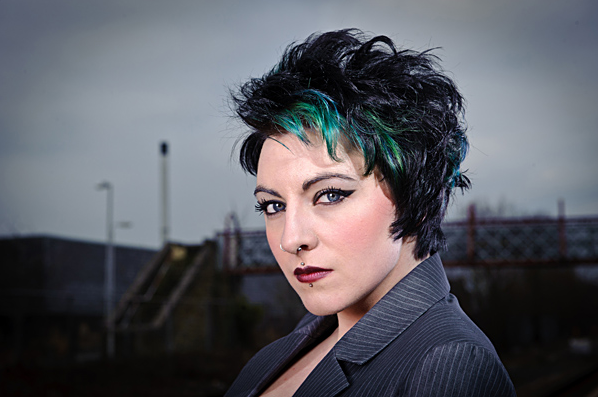 This was a shoot for Rachel Mason of Dare to be Different, although quite a stark contrast to some of her usual work. This time the images were also to be used by Loreal. Our model Emma, wore a business type suit, and the emphasis was to be kept to the colour of her hair. In fact, initial impressions were to be of a business woman waiting for a train, although more details would be revealed on closer examination by the viewer. For example, the track is in poor repair and the subject is isolated although there is a lack of vulnerability. Also the splash of colour to her hair and piercings were to add to the intrigue.

The situation was ideal to use the Classic Safari kit from Lencarta, and it proved invaluable to give me more than enough light and allow me to overpower the ambient light, providing an oppressive feel to the background. Having said that, I had to consider the target market for the image, which of course is basically a product shot. The product being the hair styling and colour.

Pretty much all the images utilised a very basic cross lighting setup, helping to lift Emma from the surroundings. The Lencarta Safari was set to 1/4 output. One head out of frame right and about five feet behind Emma, married up to a 120cm folding octabox. The second head was out of frame left, and about four feet in front of Emma, firing through a 70cm x 100cm folding softbox. If you look carefully at the images , you can see the highlights along the edge of Emma's profile, which keeps her separated from the dark background. Now, for the eagle eyed amongst you, you'll be wondering how I managed to highlight the hair with a two head safari, when it's pretty obvious both heads are utilised with the cross lighting. The simple answer is, I cheat! 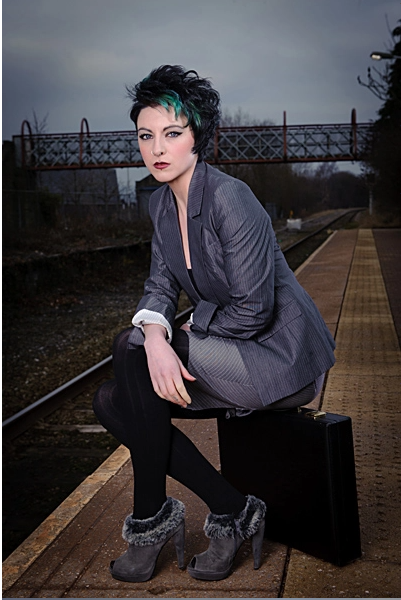 I used a speedlight set to half power and gridded, to keep the light quite tightly on Emma's hair. I also used an external battery pack to ensure the speedlight recycle time was short enough to keep up with the Safari.The speedlight was placed on top of a light stand fully extended, and just out of frame camera right.

I've occasionally been asked how I tend to meter for my location work. I meter for the ambient with the camera set to manual, and bearing in mind the effect or look I'm after. Here, I wanted to darken off the background to give a grungy or run down feel to the image, and help "pop" our model a bit. I set the camera for a correct exposure with a lowish shutter speed, say 1/60th sec, as this then gives me plenty of headroom to shorten the shutter speed to effectively under expose the background which relies on the ambient light. The initial images of Emma sat on the briefcase were 1/200th sec and f8. I don't tend to use a light meter, unless I'm teaching, as once I have the camera set for a correct ambient exposure, I'll match the output of the safari to it and check via the histogram and also look for any hotspots on the model. Then adjusting the shutter speed simply reduces the ambient light within the image.

One thing I noticed with the Safari over a period of time, is the fact I soon found I could "guesstimate" the required output for a given scene, and I'd be pretty much in the ball park first test shot. That may be down to nothing more than familiarity with any given equipment, but I certainly find the output consistency to be extremely good, and tends to be exactly as I expect, each and every time.

The shoot lasted about an hour, and the light was failing fairly quickly during the last twenty minutes, necessitating the slowing of the shutter from 1/200th to 1/125th sec which allowed me to maintain the same aperture.